Ambur Biryani or Star Ambur Biryani is a tasty South Indian dish that is native to the Tirupattur district of Tamilnadu. This traditional and unique Seeraga samba briyani recipe has a long history from Arcot Nawab and is popularized by the Star Biryani Hotel in Ambur. And hence it is also called Star Ambur Biryani. The Seeraga samba, a South Indian rice that is cooked with chicken, chili paste, and a minimal amount of spices makes this meal unique and flavorful. This Ambur biryani is a delightful one-pot meal with raita that can be served for lunch and dinner, and parties.

What is Star Ambur Biryani?

Star Ambur biryani is a delicious non-vegetarian main course food popular in the town of Ambur, Vaniyampadi, and nearby places in Tamilnadu. Ambur biryani has got this name as the biryani was popularized by the Star biryani hotel in Ambur. The original recipe of the dish was introduced by the Nawabs of Arcot during their regime and it is now widely prepared in different hotels and places including star biryani hotels.

Even though the technology has grown and even in villages we could see people cooking with gas and induction stoves, the star hotel still prepares this dum biryani with wood fire. And they believe that this adds a special taste to the dish. This is one of the uniqueness of the star hotel biriyani.

As with any other biriyani, the Ambur chicken biryani recipe is very popular and prepared among the Muslim population due to the origin of the dish. But it is equally special and famous with other people from the state of Tamilnadu for its popularity and uniqueness. Usually, Ambur biriyani is cooked with either goat meat or chicken with a high meat ratio to the rice. This is also one of the differences to note about this dish.

What is unique about Ambur Biryani?

The uniqueness of Ambur chicken biryani is that they never use green chili and other masala powders that are used in most other briyani dishes. The whole taste of the biryani comes from the chili paste, a few whole spices, and Seeraga samba rice.

Since there is no heavy masala or garam masala powders used, the dish is very light and easily digestible, yet without compromising the heavenly taste. Ambur briyani is cooked with the dum process like in Mughlai chicken biryani in which the rice and meat are cooked separately and put together in a dum.

Seeraga Samba is special rice popular in Tamilnadu and is used to prepare different biriyani recipes around the region and in neighboring states. Since this Ambur star biryani uses Seeraga samba rice, I would like to share some of the other varieties of biryanis prepared with the same rice for you to try and enjoy.

Each style of biryani mentioned below is prepared with this rice and it is unique in its own way. I would definitely suggest you prepare these delicious dishes and enjoy yourself with your family whenever you get a chance.

I have posted the recipe for Mutton Biryani which is a typical Tamilnadu special briyani that turned out really soft and aromatic. In addition to that below are some of the other south Indian biryanis that use seeraga samba rice for the preparation.

About this Star Ambur Biryani

The recipe that I have shared here is a classic Ambur star biriyani but with slight modification. I cooked the chicken and rice in the same pot instead of cooking them separately. This enhances the aroma of the chicken and rice altogether. Then once the rice is cooked to 70%, I simmered the heat to low and cook for another 15 minutes with the lid closed.

For the spice, I have taken 10 dry red chilies and soaked them in hot water for about 10 minutes. Then l ground it into a fine smooth paste. If you feel that the number of chilis used here for the recipe is too much for your spice level, feel free to reduce it to your taste. Apart from using chili paste and a few whole spices, no other masala powder is used here.

I also added ¼ cup of white onion slices after sauteing purple onions, garlic paste, and ginger paste which helps to intensify the aroma of biryani. Since I ran out of purple onions at home, I used white onions as a replacement. So you could either use white or purple onion. And I believe it wouldn't alter the taste.

I used a rice water ratio of 1:1 for this recipe and soaked the rice for 30 minutes. This helps us to achieve a nice and fluffy biryani. I would advise you to stick to this ratio as the chicken would also release a lot of water while it's cooked.

The traditional Ambur star biriyani recipe uses only Seeraga samba rice and it is better to stick with the rice for this biriyani to get an authentic taste. But it should not stop you from trying this with basmati rice if you don't have Seeraga samba rice handy. But expect to see the difference in taste if you choose to go with Basmati rice.

This special Ambur chicken biryani / Star biriyani recipe delivers a soft and moist hotel-style briyani that you will definitely love and enjoy. Typically this star biriyani is served with brinjal curry, dalcha, salna, and raita in restaurants. But you could also enjoy it with Pepper chicken, Chicken Sukka, Andhra Chilli Chicken, Chettinad Chicken, Chicken Fry, and Chicken Chintamani which are special chicken dishes that go very well with this briyani. And I am sure you will not regret it.

You could also find similar recipes below and more under Chicken and Biryani recipes.

Looking for different chicken recipes to cook for your next meal or a party? Then you could also check this collection of Biryani Recipes and Indian Chicken Dry and Semi Gravy Recipes to accompany your main dish and to enjoy with your family and loved ones.

In the video below I have shared the detailed instructions of Ambur Biryani recipe and I believe it will help you to make this authentic and delicious dish at home. For a quick reference, you could also find the recipe in story format. 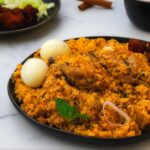 What is Ambur Biryani?

Ambur Biryani is an authentic Tamilnadu special dish prepared with Seeraga samba rice along with chili paste being the main ingredients. This biryani was introduced by Nawabs of Arcot to the people in the Ambur and Vaniyambadi region during their regime.

What is special about Ambur biryani?

The uniqueness of the Ambur biryani is that it uses only red chili paste and few whole spices along with meat and Seeraga samba rice to achieve the great flavor and taste of this biryani. And it doesn't use typical spices used in other kinds of biryani recipes.

Ambur biryani never uses green chili, heavy garam masala powders like other biryanis. Hence it is very light and easily digestible. But always having any food in moderation is key to healthy living.

Can I make this recipe in Pressure Cooker?

Yes, you can make this recipe in a pressure cooker following the same process. But do not expect the whistle, when you are cooking it in the low heat.

I really hope you enjoyed the recipe and I would love to hear from you on how it turned out for you. Please let me know. 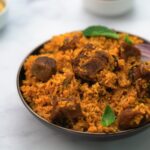 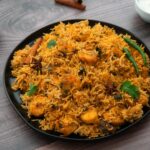 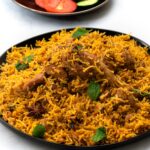 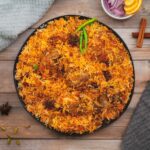