Chicken Tikka Masala is a rich, creamy and delicious Indian curry dish. It is usually made using chicken breast pieces, Indian spices, yogurt, onion tomato sauce, fresh cream, and herbs. This Indian chicken tikka masala tastes similar to butter chicken masala but with slight variations. And this chicken tikka masala recipe is easy to make at home using a pan, in the instant pot, or a slow cooker. It makes a great side dish for Naan, and Roti for lunch and dinner and tastes best with a bowl of basmati rice, white rice, jasmine rice or other rice dishes of your choice.

What is Chicken Tikka Masala?

Chicken Tikka Masala is one of the popular Indian curry dishes that got its fame throughout the world for its rich flavor and taste. Tikka is a Persian word that means a cube or chunks. The cube size marinated chicken pieces refer to as Chicken Tikka. And the grilled chicken tikka pieces that are simmered in onion tomato sauce along with Indian spices and herbs are Chicken Tikka Masala.

In restaurants, it is usually prepared with tandoors or commercial ovens to grill the meat pieces. This imparts the smoky bbq flavor and taste to the dish. But it is easy to make at home as well using a pan, skillet, instant pot, or slow cooker without compromising the same taste. And all you need is boneless chicken, onion, tomato, a few Indian spices, yogurt, and herbs like kasuri methi and coriander leaves.f

How to make Chicken Tikka Masala?

The recipe I have shared here is a tasty restaurant-style Indian Chicken Tikka Masala with a little tweak and it yields 3 people. To make that, Initially, I marinated the boneless chicken pieces with yogurt, ginger garlic paste, salt, oil, chili, garam masala, turmeric, and pepper powder. And allowed it to rest for 60 minutes. Marinating the chicken for long hours makes the chicken soft and infuses deep flavors to it.

After that, I pan-fried the marinated chicken pieces on medium heat, until they turned golden brown on both sides. Actually, to say in detail, I char fried the chicken pieces without burning them. This delivers a smoky flavor that we usually get with tandoors. Once that is done, I reserved them for later use.

Following that, In a pan, I sautéed the onion until it turned soft. To avoid burning the onion, I kept the stove on medium heat. Then, I added ginger garlic paste, chili powder, garam masala powder, and salt, and mixed everything well. After that, I added the tomato puree and gave a good mix.

Subsequently, I mixed the fried chicken along with the onion-tomato mixture. Then I poured water and closed the pan with the lid and cooked them for 5 to 7 minutes. This allows the chicken to absorb all the flavors from the gravy as well.

Afterward, I opened the lid and added curd/yogurt, and gave a quick mix. At this stage, you could also use heavy cream instead of yogurt to achieve a restaurant-style finish.

Finally, I added the dried fenugreek leaves/Kasoori Methi and gave a quick mix, and turned off the heat. Then I served this delicious dish with Naan and Jeera rice.

Chicken Tikka Masala is a flavorsome curry that has a lot of variations around the world. And it has an important place on the menu in most Indian restaurants. Usually, in the restaurant-style version, the chicken is marinated for long hours which helps the chicken to absorb all the flavors from the masala and makes it so soft and tender. They also use heavy cream while making the tikka masala which delivers a smooth and silky output to the dish.

Even though the restaurant-style version uses only boneless chicken, you could also try it with bone-in chicken. And it tastes amazing too. Relishing a soft and juicy chicken piece in a spicy and creamy curry with hot Matar Pulao or basmati rice is heaven!

There is a lot of confusion always surrounding the topic of butter chicken and Chicken Tikka Masala. Since they are similar texture-wise and look. So I thought to write a piece of brief information regarding the same.

Butter chicken(Murgh Makhani) is usually a mild gravy that has fewer spices part of it. Whereas the Chicken Tikka Masala requires a lot of spices in the recipe.

Even though both the dishes look somewhat similar, you could feel a slight difference in their taste. And Butter Chicken recipe needs only a creamy blend of tomato sauce while a lot of onion and tomato for tikka masala. And of course, the butter chicken delivers an irresistible buttery flavor while it is subtle in tikka masala.

This chicken tikka masala recipe is a perfect crowd-pleasing dish that would be a great treat for kids and adults. Be it a party, weekday, or weeknight meal, it never fails to satisfy your taste buds. You could pair this delicious dish with a bowl of jasmine rice, basmati rice, white rice, pudina rice, chicken biryani, or vegetable biryani with a piece of Naan to indulge in one of the best flavors. And I believe you will try and enjoy this dish with your family and loved ones.

More Indian curry recipes you may be interested in:

Looking for different chicken recipes to cook for your next meal or a party? Then you could also check this collection of Indian Chicken Dry and Semi Gravy Recipes to enjoy with your family and loved ones.

In the video below, I have explained how to prepare/make chicken tikka masala with step-by-step instructions which might help you to easily prepare this recipe at home. For a quick reference, you could also find the Chicken Tikka Masala recipe in a story format.

Chicken Tikka Masala is an authentic and flavorful Indian chicken curry dish. It is usually prepared with fried or grilled boneless chicken that is simmered in tomato sauce, Indian spices, along with yogurt and herbs. It is served as a side dish for lunch and dinner along with roti, rice, and naan.
5 from 1 vote
Author: Sangeetha Vel
Subscribe print email pin comment
Course: Main Course
Cuisine: Indian
Diet: Halal
Prep: 10 mins
Cook: 40 mins
Adjust 3 servings

What is Chicken Tikka Masala?

Even though chicken tikka masala is prepared with fresh ingredients, heavy cream, and butter are part of the making process which is high in calories and fat. So, better to consume in a moderate quantity. But we can also make it healthier by replacing heavy cream with yogurt or coconut milk and butter with olive oil.

Can I make Chicken Tikka Masala with coconut milk?

Yes, you can make this dish with coconut milk by replacing the yogurt in this recipe.

How can I make this dish with heavy cream?

Yes, you can make this dish with heavy cream by replacing the yogurt in this recipe. Even you could use cashew milk or paste.

Can I make this dish in the instant pot?

Yes, you can make this dish in the instant pot, follow the detailed instructions mentioned above. 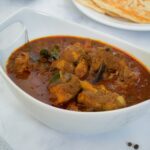 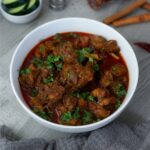